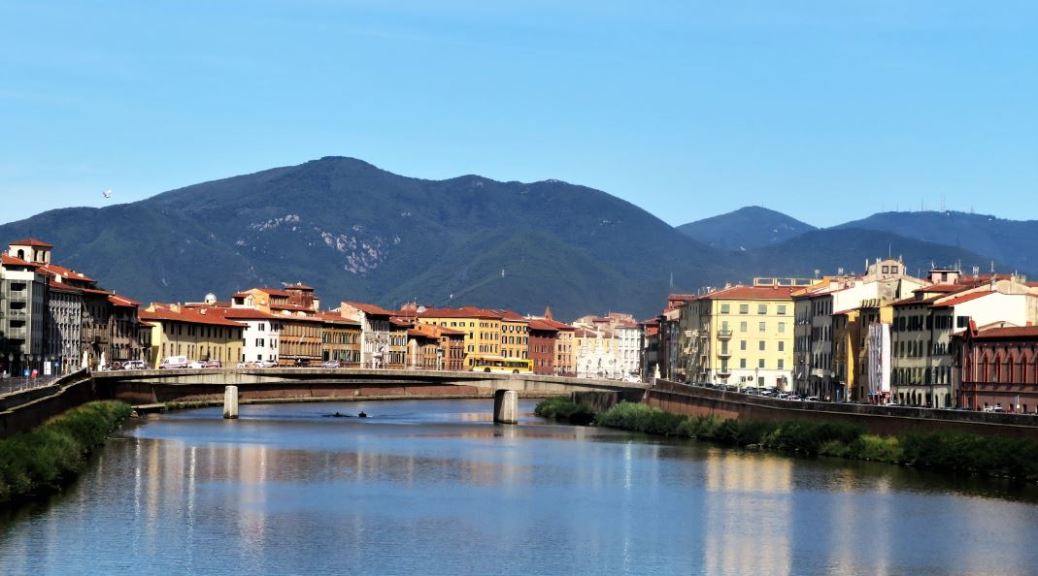 Pisa is a city in Tuscany in Italy, with a population of 90,000 residents. Whether or not you have ever been to Pisa, you will surely knowthis city, famed across the world for its leaning tower, but the city’s delights don’t stop here: it has other assets to see.

Pisa was one of the most important cities of the Renaissance, being the place of birth of Leonardo Fibonacci, Pisanello and Galileo Galilei. In Pisa, you will discover not only Romanesque and gothic architecture, but also contemporary art in the Palazzo Blu.

It is here that you will see the famous Leaning Tower of Pisa, tilted at an angle of 3.59 degrees towards the south. The incline of the tower is due to the shifting of the soil which supports it, but work has been undertaken over the years to prevent the tower from collapsing, and it has since become straighter. The construction of the tower begun in 1173 and lasted for two centuries. This piazza, where the tower is located, is now a UNESCO World Heritage Site, thanks to the collection of buildings found here which have become emblematic of the city.

Beyond the tower, Pisa Cathedral (also known as the Duomo) is situated on this square. The cathedral is a Romanesque basilica made of white marble, with five naves designed by the architect Buscheto. Construction began in 1063, and the cathedral is also a UNESCO world heritage site. To enter, you must go through the bronze Porta di San Ranieri (San Ranieri’s door), on which scenes from the life of Christ and the Virgin Mary are depicted. Once inside the cathedral, you will see the ornate pulpit constructed by Giovanni Pisano. What’s more, the cathedral is open on Sunday mornings, and all are welcome at mass (shoulders and legs must be covered before entering).

The Battistero di San Giovanni (Pisa Baptistry)is the largest baptistry in Italy. Built between 1152 and 1363, it is an example of a mixture of Romanesque and gothic architecture, because each level is constructed according to a different style.

The camposanto (a gothic-style church and cemetery) carries a local legend, according to which the Archbishop of Pisa, Ubaldo de Lanfranchi (1108-1178), returned from his crusades with a cargo of sacred earth taken from Golgotha. This earth was then mixed with the ground in the cloisters of the cemetery. Because of this, bodies buried there are said to rot in twenty-four hours. The walls were originally covered with frescoes and, while many were destroyed in World War II, some of the frescoes have been recovered and are on display in the Sala Affreschi. The most famous of these is the Trionfo della Morte by Buonamico Buffalmacco, a stirring depiction of Hell.

This is a small church situated at the roadside on the left bank of the Arno, built in a highly ornate gothic style. The church owes the ‘spiny’ part of its name (spina) to Christ’s crown of thorns which was brought to Pisa from the Holy Land.

It is on this square that the Palazzo Anziani could originally be found. The architect Giorgio Vasari altered the palace in 1562, reconstructing it to create the Palazzo della Carovana, where the headquarters of the Knights of the Order of Saint Stephen was located. Today (and since 1810), the building is home to the Scuola Normale Superiore di Pisa, founded by Napoleon. A statue of Cosimo I is also found here.

The Baths of Nero

The only remnant of the Roman period to be found in Pisa, these baths are conserved within the city walls, and date from the first century AD.

You can take a walk of around two kilometres along the city walls to admire the city and see the Piazza dei Miracoli from above.

Lose yourself in the streets…

The best way to experience a town like Pisa, smaller than Florence, is to wander through the streets, appreciate the colourful alleywaysand the winding pathways. Far away from the crowds of tourists at the Piazza dei Miracoli, you will see a calmer side of the city and discover a whole other – typically Italian – universe, where sheets hang drying between the windows.